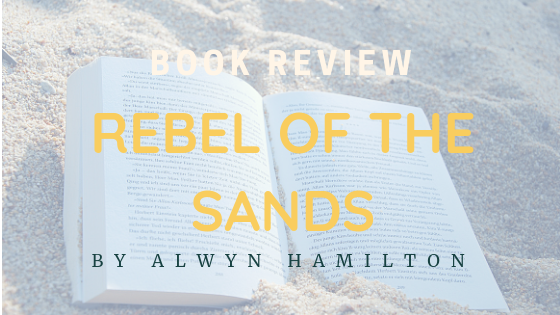 Book Review: Rebel of the Sands by Alwyn Hamilton

Rebel of the Sands

This is the first book in a trilogy.

It is set in the Middle East, in the desert. There is a western feel to it with the guns but a fantasy element with the magic and mythical creatures.

This is my review.

What is the book about?

The story is set in the desert in a time when women are oppressed. Amani lives in a small town with her aunt and uncle as her parents are dead. It isn’t a happy home, they are poor and she is coming to an age where she must be married but doesn’t get to chose who. Her uncle thinks she should marry him and she can’t think of anything worse. So, she plans to escape.

Fortunately she is a good gun slinger and decides to dress up as a man and enter a shooting contest. She plans to runaway with her winnings.

Skip to ”What did I think” to avoid spoilers.

At the contest she earns the nickname Blue Eyed Bandit (her eye colour is unusual) and although she makes it to the final and is clearly the best shooter it turns out the contest is fixed and she is lucky to make it out alive.

The soldiers are looking for a criminal which turns out to be Jin, the guy she met at the contest and helped her escape. Amani helps him hide although Jin doesn’t recognise her without her disguise.

Later, when she captures a magical horse, worth a lot of money, she thinks her luck has changed. But, her uncle decides they must marry so he can take the money. The mine explodes and in the chaos, Jin helps her escape with the horse.

At first Amani and Jin are not travelling companions but as their paths keep crossing they end up helping each other. There are also a few almost kisses.

To avoid getting captured Jin suggests they join some travellers as hired help. Amani has to pretend to be a boy and is hired as a shooter as the route is dangerous.

During their travels they see some of what the army are doing and discover they have created some type of bomb and will use it on civilians and blame the rebels.

Whilst travelling, Jin is attacked by a creature that creates nightmare. The party want to leave him behind as he will slow them down and die but Amani stays with him. She is determined to get him across the desert in his fragile state. A creature is tracking them so Amani has to find somewhere safe, she finds a wall and says the secret phrase from the fairy tale Jin has been telling her and the hidden entrance opens.

This trip was a little tiresome for me and Amani didn’t have much purpose. Her family were long gone and she was running to a city where she thought her life would be better.

Amani finds the rebels secret hideout. Whilst at the camp she meets Dijinnis and learns about how they all have a unique characteristic. She discovers her blue eyes are because she is a Dijinni. She also discovers Jin is the rebel prince. At first she is angry he hid this from her but later forgives him.

She joins the rebel’s and helps them to stop the bomb by figuring out her power in the nick of time. She also gets with Jin and they kiss.

What did I think

I like the magic and world building I’m just not a massive fan of travelling within stories. I also wanted the magic sooner but I guess that was the tease to hook me until the end. Amani is a strong fierce character which I enjoyed. The chemistry between Jin and Amani was subtle although it was obvious that he would be the love interest. I get the feeling the passion is being saved for a book later in the series.

I’ve got the next book to read but decided to read Red Queen instead. Rebel of the Sands is a good book and worth a read. There is a movie coming and I think the magic will look very exciting on the screen.

Have you read it? What did you think?

If you liked this, you may enjoy:

How to write a Trilogy – lunch with Alwyn Hamilton

Book Review: Who runs the world by Virginia Bergolt

3 thoughts on “Book Review: Rebel of the Sands by Alwyn Hamilton”