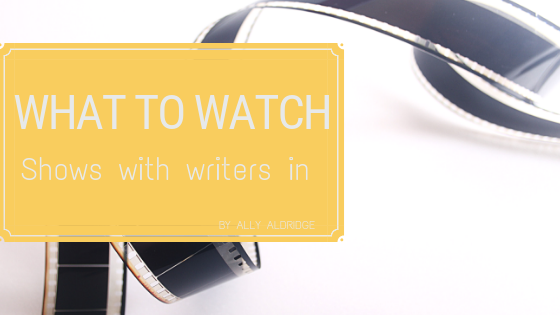 What to watch – Shows with writers in

Here is a pretty diverse list of shows that feature writers from publishers to bloggers and everything imbetween.

This show is a creepy love story from a serial killing stalkers point of view. The narrator describes what he can see in third person which feels unnatural and works really effectively.

This show made the list because the MC owns a bookstore and is stalking an aspiring author. The aspiring author is portrayed really well. She is struggling financial and often procrastinates instead of writes – eek.

Liza is in her 40s, her daugher is off travelling and her husband has left her. After putting her career on hold to raise her family, she finds returning to work impossible as everyone thinks she is too old, so Liza pretends she is 26 and lands a job.

This show made the list because it is hillarious and the industry Liza works in, is publishing.

The movie is about Charlie Brown trying to win the heart of the little red hair girl that has moved to town whilst Snoopy is working on a script.

Okay, this is a movie but there is a Snoopy TV Series but I’ve not been lucky enough to watch it. This made the list because there is no other cartoon about a scriptwrtier dog that has quite as many memes as Snoopy, thanks to his cartoon strip.

I’ve had to update my post to include this series. I love it. I find the narrator hilarious, and the story lines are very OTT but this series is addictive and pretty easy viewing if the kids are about. In addition, Jane is an aspiring writer that gets a book deal by writing novels based on her life or those close to her. This drama has drama!

This British comedy follows to Script writers that move to LA following their big break.

This made the list becasue the two main MCs are scriptwriters. In true British style it is painfully honest and the pair will find that things don’t go quite as they planned as things are changed and pressure is put on them… but delivered in a funny way.

I absoultley loved this TV Show. It is about a group of friends that are terrorised by an anonymous person going by the name of ‘A’.

This show made the list because two of the main characters are writers. Aria eventually becomes a publisher and helps her fiance Ezra with his novel. There are a few occasions that I felt the show was unrealistic but I didn’t care because the story lines are gripping, complex (sometimes I did get lost) and these teens are so cool.

A school girl falls in love with a vampire and this brings a whole lot of drama into her life and others living in Mystic Fall.

This show made the list because the MC, Elena, writes a diary – is it a stretch to say it is an autobiography.

An anoymous reporter shares gossip about the elite social crowd’s drama. She posts online using the psydemo going by the pen name of Gossip Girl.

This made the list, not because of the anonymous reporter but because one of the MCs, Dan Humphrey, dreams of being a writer. Not only that but Nate Archibald works at the Spectator for a short stint.

This TV series follows the lives of women living in Wisteria Lane following the death of one of their neighbours/friends.

It is probably a bit of a strech to add this to the list because Susan who during the series gets a job as a Children’s book illustrator is never really seen working, except when she is an internet ‘model’.

This British crime investigation series involves a jornalist working with a magician to solve unusual crimes.

This made the list because the jounalist is recording and writing about the unusual crimes that they have worked on and solved. There is also some light comedy between the pair.

The show follows a group of friends living in New York and trying to find love.

This made the list because MC Carrie Bradshaw writes column for a magazine.

And, I’d like to wish a Happy Birthday to Sabrina Sheldon of Hustling Writers Community (Facebook group). She set group members a 100 word writing challenge for her birthday.

When I told her, I had written this blog post she asked if Castle (2009) made the list. Unfortunately, it hadn’t as I’ve never watched it. It’s now on my ‘to watch list’.

Have you seen it it or any of the shows I listed? Can you think of any other shows I’ve missed?

5 thoughts on “What to watch – Shows with writers in”