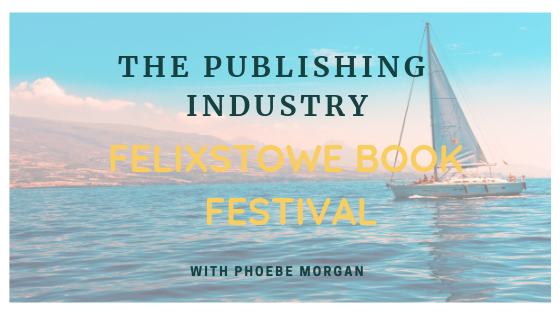 This event was hosted by Phoebe Morgan who promised to share her advice on how to get published, attract an agent and attract an editor. It was held at the Sailing Club with stunning views of Felixstowe Ferry.

Phoebe Morgan is the best selling author of The Doll House and works at Orion as an Editorial Director. She explained a little about the books she works on (crime, thrillers, women’s fiction and saga). She had created a presentation especially for us.

Before she started, Phoebe went around the room and got each of us to introduce ourselves and what we are writing and hoping to get out of the talk. There was something very endearing about Phoebe. People instantly warmed to her and wanted her to know about their writing. I think it is the way she appreciated and valued every writer in the room.

I shared that I have just finished editing Jewel of the Sea and sent it out to Beta Readers.  I explained that I have queried a lot, been rejected a lot and then edited again and have lost count of the cycle.  I confessed that I am now considering self publishing and believe my query letter and synopsis is not having the right effect on agents.

Phoebe’s talk began talking about bestsellers and popular genres and why these books are doing well. She emphasised why it is so important for writers to know what is trending when they are querying because this links to how it will be pitched to editors and publishing houses.

Phoebe had put together examples of pitches to illustrate how important it is to quickly get agents up to speed on what your novel is about in just one sentence.

Example: The Girl On The Train by Paula Hawkins – Woman sees inciting incident through her train window.

Phoebe told us what genres are trending right now. However, it is best to write the novel you want as these are constantly changing. She talked about why genre fiction is popular and why it is important for us to identify the genre where our novel will be placed. This helps the publishers identify where to market, package, design and price it. She pointed out how we need to be passionate enough about our books to promote it for two years!

Phoebe had collected examples of the first line of successful books and discussed how these sentences grip the reader right from the start. She pointed out how agents are often very busy and if they are not pulled in from the start, they will move on to the next. She pointed out how in a shop, a reader may pick up a book and look at that first line to decide whether to buy it or not.

Example: The Girl On The Train by Paula Hawkins – There is a pile of clothing on the train tracks.

Then, she got us to share the first line of our books and discussed their strengths. She also suggested that some writers should consider starting further into the story where the action starts.

She went on to talk about how to use suspense and pacing in our novels giving us tips on how to use these to make our novels a page turner. For examples, shorter sentences and chapters can speed up action but you can do the opposite for when you need to pull the reader in for more detail – there needs to be a balance between the two.

Ending a chapter on a cliff hanger can leave a reader needing to read the next chapter, to do this successful you need the reader to care about the character and be worried about them or the invested in the outcome. It helps to make the characters life full of obstacles – if it is too easy, it is boring. Obstacles create conflict.

Phoebe briefly covered different ways to structure your novel and why this is important.

Characters are incredibly important in your novel so Phoebe had collected a few tips to help us. In my notes I jotted down:

Phoebe then got us to think about one of the characters in our novel and write for five minutes about their backstory.  I chose Luna who is a secondary character but her back story and actions are the catalyst for the entire series.  She is a character I need to know inside and out.  I may one day write a short story about her.

She then told us about the steps to getting published. There were twelve steps! I’ve always been focused on ‘getting an agent’ that I have not thought much more about ‘what next’. It turns out there is a lot that happens after you get an agent, and a lot that happens after you an editor and after all that, when you finally get an offer from a publisher, you can say no.

Phoebe went into more detail about what an agent does and how to pitch one. I felt like I knew a lot of this as it is something I’ve done a lot of. Phoebe was able to recommend some good agents and resources like The Writer’s and Artists’ Yearbook.

She then told us what editors look for. It was very insightful to hear this as the agent will be looking for these things in your query. The agent will be trying to figure out whether they can pitch your novel to editors. Here are the main things editors want:

She ended by warning us that rejection is something almost every published author has experienced. She gave us tips on how to deal with and was very encouraging that a rejection doesn’t mean give up.

She finished by giving us a list of resources for further information and how to contact her if we have further questions. She also took our emails so she could send us a copy of her presentation.

Phoebe was so lovely, approachable and genuinely wanted to help everyone in the room. Writers who get to work with her are truly blessed.

I did have a damsel in distress moment in the car park where a knight in shinning armour came to my rescue. More about this in my next Felixstowe Book Festival post.

I hope you have found this useful. If you want to connect with Phoebe, you can find her:

And don’t forget you can buy her debut novel The Doll House, or The Girl Next Door.